The pages of the Willow Wood Wanderer, our local newsletter are often adorned with cartoons from the park's resident cartoonist John Sloan.  Sloan's cartoons reflect life as it is at Willow Wood often taking a pot at authority or lampooning the local residents whatever the occasion.  This page draws together a selection of some of Sloan's work.

Click on each image to enlarge.
John Sloan, our resident cartoonist
John Sloan specialises in catching the mood of the moment. Here he gives his take on happenings around the park in recent months
Sloan on Renewable Energy
Sloan on Sewage Charges
Sloan on rumours of a park sale
Sloan on the influx of Poles to Scotland
Sloan on grass cutting
Sloan on garden plants

Sloan on the anonymous fence painter

Sloan on the garden opening 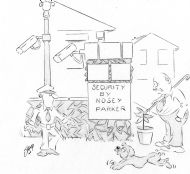 On the arrival of CCTV cameras

On Committee Resignations
"You wouldn't have much bite either, if half your teeth had dropped out!”

On the proliferation of touring caravans
Nae future did ye say? Contact Madam Zola, third van on the right!